Petra Jordan is an archeological site located 240km south of the capital Amman and 120 km north of Aqaba city. Petra Jordan was built by Nabataeans Arabs as early as 9,000 BC and then it became the capital of Nabatean Kingdom in the 4th century BC.

Petra Jordan is one of the new seven wonders in the world which made it a valuable asset and a touristic destination for tourists from all over the world.

Petra Jordan is also called the Rose City due to the color of the rock into which it was carved, and is famous for its water conduit system. The main entrance of the ancient Nabatean City is Al Siq which is a narrow way that ends with Al Khasaneh the most elaborate temple in Petra Jordan. You can ride a horse, camel or donkey during your walk through Siq, but only camels and donkeys are allowed after the treasury.

Petra Jordan was chosen by the Smithsonian Magazine as one of the 28 places you should visit before you die. 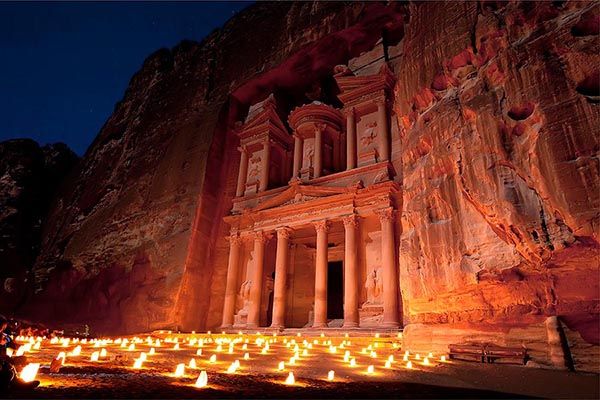